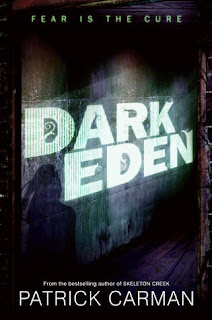 Now I have been waiting to read this one for what seems like forever.  Since I got to meet Patrick Carman last fall, and then the book didn't come out till November, then I didn't have the money at the time to buy it.  So it actually is part of my TBR challenge since I've been waiting so long.
I really did like this book.  The main character is Will Besting.  He has been seeing a psychiatrist for a while, and she now thinks that there is only one way to fix his problem.  Now, Will is a bit sneaky.  His main issue is being around other people.  When his psychiatrist leaves the office, he goes through the files on her computer.  And the day she tells him about this "cure" and that he'll be there with 6 other people, he searches and finds the files for the other 6 people.  So he copies them to a recorder and takes them home and listens to them.  So by the time he goes to Fort Eden with these 6 other people, he knows all about their problems.  But, due to his problem, he chooses not to go with them, and finds a bunker to hide in on the premises.  From there he finds a room with monitors where he can see all his fellow patients, even see how they are cured.  He makes friends with one of the girls in the group, and even sneaks out to meet her.  But with his issues he is paranoid, and while he is seeing things the others aren't, he doesn't know what is something to worry about and what isn't.
I saw what was going to happen when it came time for Will's cure, not in a bad way, just had a feeling that was going to happen.  And you wonder all throughout why the cures are so easy, but leave them each with different side effects.  But when you find out exactly what is happening, it's a good twist, and I like that it was left open for a sequel.  Which I am actually reading right now, thanks to an ARC I got from The Story Siren when she was clearing out some of her shelves.  I love when I get to read series books one right after the other. I often wish I would get into series after they were over so I didn't have to wait a year, or longer, in between each book.
What I also love about Dark Eden, and many of Patrick Carman's books, is the interactiveness, such as the app and website for this book.  The first segment of the app is free, you can find it under the keyword Dark Eden.  And the website where you can go is Enterdarkeden.com.  I learned when I met the author that he has a recording studio in his house and so is able to do all these cool things, which if you've read the Skeleton Creek series, you've seen some really creepy videos.  I brought these books in for our special education teacher to share with her kids who weren't big readers, and they love them! I think this is such a great way to get non readers hooked!
Posted by Lisa Mandina at 12:54 PM