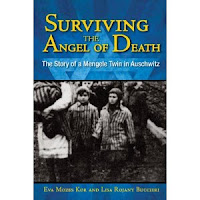 This is another egalley from Netgalley. I believe it has also already been published. But as this is a holocaust story I was extremely intrigued and wanted to read it. It was a quick read, it is a book for young adults, probably upper elementary-middle school.

This is actually a true story, about a set of twins, Eva Moses and Miriam, identical twins. They began their lives in Transylvania, the only Jewish family there, which was not a big deal until a German teacher was sent and they spread the hate propaganda of Hitler, and their friends now turn on them. At the age of 10 they are taken with their family in a cattle car packed with other Jews to Auschwitz. At the station they are separated from their family when it is noticed that they are twins. It is assumed that their family all go to the side that ends up dying, as they never see them again. Another set of twins from the area and their mother also go with the Moses and other twins. The mother is allowed to go because she says she can tell secrets and information about twins to the scientist performing the experiments, Dr. Josef Mengele. Anyone who has studied the holocaust has heard of Mengele and his experiments on twins. He would subject them to horrible diseases and other torture just to see the difference between the twins. And when one twin would die, they would then kill and autopsy the other to compare what the difference was. Eva decided she would not let her sister die, and this is her story of how she does whatever she can to keep herself and her sister alive. This is another hard look at how some survived in the concentration camps. It also shows what happened after they were rescued, and how things weren't just all of a sudden perfect.

A really touching story, and a good read for any student interested in learning about the holocaust.
Posted by Lisa Mandina at 7:29 PM