I have to admit, that actually, until I decided last minute to go see Meg Cabot down on the Plaza a couple weeks ago, the only books I'd read by her were adult ones, like Boy Meets Girl, ones told in email and texts, and instant messages. Quick, fun, chick lit reads. I loved them all. I'd never read any of her teen or ya books as they just didn't quite sound like I'd want to read them. I'm ashamed of myself now as I loved Abandon, and after listening to her talk about another series, the Airhead series, I now want to read those as well.

Abandon is kind of a re-take on the whole myth about Persephone and Hades, only retold with a modern take. I'm so glad to hear it is a trilogy as it left off on a major cliffhanger in my opinion and I 'm really enjoying the story. Our "Persephone" is named Pierce Oliviera. And she met her Hades, when she was younger at the cemetary for her grandfather's funeral. When she is older, she drowns in her family's pool, and goes to hell, where she is confused and scared until she sees the familiar face of the young man she met when she was a little girl, only now, he looks to be about her age, because he has not aged since that time she first met him. His name is John, and he offers to save her if she comes to live with him. He gives her a necklace to protect her from danger, such as the Furies, but she doesn't want to stay here, so she is able to run, and is brought back to life. She runs into him as he seems to show up to save her when she is in danger. And she ends up back in Florida, Key West, when something really bad happens and her mother must find her a new school. We find out there is more to the story than her just happening to meet him by coincidence when she was a child. 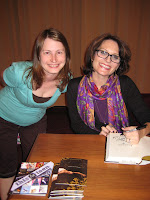 A very good story, and I look forward to seeing where it will continue. I've included a picture of when I met Meg Cabot in this blog as well.
Posted by Lisa Mandina at 10:38 AM