2013 Truman Possibility 20: Everything I was by Corinne Demas 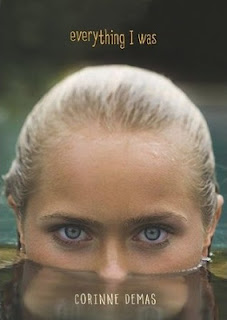 A short, quick read.  But, while the story was pretty good, it was pretty forgettable.  Whenever I would go back to read it, I couldn't remember at first what it was even about.  And I also have to say that the cover doesn't fit it in my opinion.  The girl peeking over the top of the water really looks kind of creepy.  And it is not a creepy story at all.  The main character is Irene.  Her father used to be a big shot corporate Vice President, who lost his job when they were bought by another company.  So now they can't afford to stay in their fancy Manhattan apartment.  So they go to stay with her grandfather in upstate New York for the summer, while her dad looks for a job, and her mom tries to find a new place for them to live that her mom feels is "acceptable" to the style of living she is used to.  Irene also has a half-sister named Jenna.
Irene finds that she loves the simple life at her grandfather's, and even makes a new friend, and a possible boyfriend.  Irene doesn't want to go back to her old school as a scholarship student.  She remembers how those kids were treated and looked down on.  She learns that her grandfather has had offers to sell off his land, and her mom thinks that is a way they could pay for Irene's tuition so she wouldn't have to be on scholarship.  But Irene has learned to love nature, and her grandfather's land, and won't let him do it.  She gets to go spend a week with her sister, which is good, but she also learns she is afraid of heights, and learns things about her mother that she didn't know that she wasn't the only one who noticed.  It does end with a mostly happy ending, but not a forever ending, things are kind of left up in the air, but in a happy way.
One other issue I had besides the forgettableness of the story was that Irene was so okay with the bugs and rodents and all the other icky outdoorsy stuff without a bit of complaint.  I'm sorry, isn't she a city girl?  Living in a penthouse apartment in Manhattan?  How in the world is a girl that age not freaked by that?
Not a bad story, just not a great story.
Posted by Lisa Mandina at 6:26 PM

Email ThisBlogThis!Share to TwitterShare to FacebookShare to Pinterest
Labels: Corinne Demas, Everything I Was, New York, Truman books