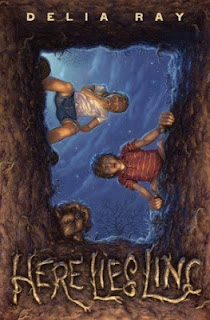 This was a cute story.  I don't know that it is the best choice for the Truman list for next year.  I think it might actually be a better choice for the Mark Twain award which is the younger award.  Yes, the kids in the book are junior high age, which is the age of the readers of the Truman award nominees, but it just felt like a little bit younger student would enjoy this story.  Again, there are 6th graders reading the Truman, and maybe some of the not so great readers, so for them it might be a good one to have on the list.  But it will not be one of the top ones that I recommend.
The main character is Linc, short for Lincoln.  His mom is an anthropologist who studies burial customs.  So he has been to graveyards all over the country.  And he lives right next to one now.  He's asked his mom to let him out of the home school group this year, so that he can go to the public school.  Once at the public school he feels really out of it, often bullied.  And then, he finds out that they are going on a field trip to the one place he doesn't want to go, with the one tour guide he really doesn't want to have.  The cemetery by his house, and the tour guide is his mother.  He is able to get her to pretend not to know him, and since they have different last names, it works, until... One of the cool kids, that Linc knows from the home school years before, is drawing a picture of his mom making fun of her.  Eventually Linc can't stand it and blurts out that she is his mom.  Well, after he runs home, he finds out that they had a project assigned.  They must pick one grave and research the person.  Linc chooses the Black Angel, a statue with a history of a curse.  But his plan is to prove that all the mysteriousness about the statue is just silly.  One of the other kids in the class, Delaney, chooses a grave that has a last name just like Linc's middle name.  And so they begin to work together.  Linc keeps finding things that don't help him prove the stories wrong, but start to convince him there may be a curse.  And with Delaney's grave, they learn soon that Linc has family he didn't know about.  Linc is trying to fit in with the popular kids, but also has problems with the new person in charge at the cemetery.  Plus, more problems with his mom, the scatterbrained historian.
Overall this was a good story.  Some good background story, definitely.  And good teen dealing with parents, as well as the popular people at school.  A good story for sure, I recommend it to probably 5th, 6th, and maybe some younger 7th grade readers.
Posted by Lisa Mandina at 10:34 AM