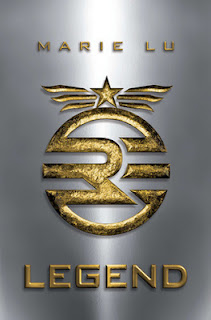 This is a book that I've seen bouncing around the Book  Blogosphere for awhile now.  I was very excited to get a copy of it at BEA this summer.  It's not signed, and I didn't get to meet the author unfortunately.   And I put it off reading until I got the list of the Truman possibilities and saw it was one of them.  And even then, I waited till about halfway through the books, because I had a good feeling I'd really like it, and I didn't know how many of the others I would like.  So I saved it for later.  And it was very good!  Now I'm eager to read on in the series.  I gave it a pretty high rating on Goodreads because I felt it was pretty original.  Yes, it was a dystopian, which there are many of.  But it had an interesting take on it.
We have two main characters that tell us the story.  First is Day, the most wanted criminal in the Republic.  From what I can tell, the Republic is basically California, or maybe all of the Western US coast, as its own nation that seceded from the United States, now called the Colonies.  So I'm guessing that Day is the Legend that the title refers to.  One reason I guess that is because the sequel is called Prodigy, which I'm assuming will refer to our other main character, June.  June is a prodigy, the only 10 year old to ever get a perfect score on the Trial.  So therefore June is now, 5 years later I believe, in the military school, of course as a prodigy, expected to move high up.
Day has become a criminal because when he took the Trial, even though he thought he did really well, he was told he failed, and so was supposed to be sent to a training camp.  But he wasn't.  He was taken away to a lab, where they experimented on him.  But he escaped.  Something considered really unusual for someone to escape from the "training camps".  And since that time, he has begun doing what he can to sabotage the Republic.  Really trying not to hurt anyone.  But when he finds out his family has the plague, he must find a way to get a cure.  So his next mission is to a hospital.  But he doesn't quite get out of it this time. Metias, June's older brother is there to stop him.  In order to get away, Day throws his knives at him, thinks he hits him in the shoulder, and gets away.  With injuries from dropping from the building.
June is woken up that same night, to come and identify her dead brother.  And she vows revenge on Day, doing whatever she can to help the Republic catch him.  Part of this ends up being going on an undercover mission to find him.  Which she does, and he ends up helping her when she gets injured.  At first she doesn't know Day is the Day, she doesn't know his name.  He and Tess are very careful not to say it.  But soon she figures it out.  And when she does, she knows she has to turn him in.  But she makes the soldiers, including her brother's friend Thomas, who she grew up with, promise not to hurt anyone in his family.  Again, this doesn't happen.  They kill his mother right in front of him.  June is so upset, and finally begins to see Thomas as not such a good friend.  She starts going through her brother's journals, and even finds things that lead her to believe Metias had also found something going on.
It is these mysteries, some of which June solves, that lead her to make her next decisions.  And lead to what happens to Day and his brother.  Great, great story.  One I didn't want to put down, and of course I was reading it with little time!  I will not be surprised if this is on the Truman final nominee list.
Posted by Lisa Mandina at 4:19 PM