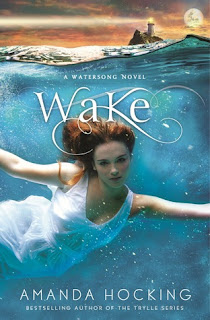 As always I'd like to thank the people who made it possible for me to read an advanced copy of this.  I was fortunate enough to walk into work at Barnes and Noble and see this sitting on the break room table.  As I had fallen in love with the Trylle series by Amanda Hocking, I immediately grabbed it and stuffed it into my locker to take home.  Thank you to St. Martin's Press for sending a copy to my store for me to get!
Okay, first I have to say that this is my first foray into the "mermaid" genre.  Although, technically, they aren't mermaids per se, but sirens.  I do have to say that I was not disappointed in the story though.  Again I can see that Hocking has really built her own mythological story with all the details to make the story work.  And even though we don't know quite everything, I mean, if we did, why would we read on, you can see that there is thought behind what all is happening, and a reason for it.
The main character is Gemma, she's 16 years old, and loves swimming, in fact she's so good, that she's working towards the next Olympics.  And she's starting to notice the boy next door.  And he's noticing her right back.  She lives with her father and her older sister Harper.  Their mother was in a car accident a while back, and hasn't quite been right since then.  So she had to go live in a  home where there would be people to keep an eye on her.  It doesn't sound like a nursing home type of place, though, so not bad.  So since that, Harper has felt that she must fill in for Gemma as her mother.  Something that Gemma sometimes feels is a bit annoying, as any teenager would for an older sister acting that way.  Recently there have been 4 new girls in town, although one has not been around as much.  These girls are Penn, Thea, and Lexi.  Harper gets an uneasy feeling around them.  They're beautiful and popular, but there is something dangerous or menacing about them.  Gemma likes to go each night to the sea and swim when no one is around, even though she notices the 3 girls in one of the coves each night, but she stays away, because she wants to swim in solitude.  One night, the girls call to her, and it's like she can't resist, even though she wants to, and so she goes up and hangs out with them in the cove.  They give her a drink, after which she gets really out of it, and wakes up on the beach the next morning, unable to remember what happened the night before.  But now she's grounded for staying out all night when her father and sister wake up to find her missing.  The truth is that Gemma can now really swim, and she feels even more beautiful.  In fact she seems to have a bit more of a mesmerizing effect on the boy next door, Alex.  But as you would assume, there is a price to her new powers.  And the mysterious girls are the reason, and hold all the answers.
As I said before, the story did not disappoint.  My only issues, first, I don't like that the parents are called by their first names.  It confuses me.  I don't remember what other book I read that in recently, but it just is weird to me.  Second, when I first talked about how much I liked the Trylle books, someone commented that they'd heard Hocking's e-books had lots of grammar mistakes.  I didn't notice any in the Trylle books, but I do have to say that I did in this one.  Yes, it is an ARC, so I'm sure they'll all be fixed before it is published.  I hope.  And when I say grammar mistakes, just really things that probably came from writing quickly to get the story out, thinking ahead of the line she was one, etc.  I do that too sometimes.  Thank goodness for editors and friends who check things!
To wrap up, I am eager to read on in the story.  One funny thing, as I was reading this, I watched the Animal Planet's show about "real" mermaids.  It was funny to me that I just happened to watch that as I was reading a book about the topic.  And this gives me a bit of a nudge to go ahead and maybe dive into some other mermaid types of stories.
Posted by Lisa Mandina at 5:55 PM