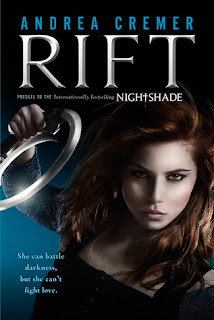 I was very lucky to get this ARC at BEA and even get it autographed by the author!  I was very excited to read this book.  I love the Nightshade series, you can see my reviews of the books here:  Nightshade, Wolfsbane, and Bloodrose.  So I was very interested to go back and learn where it all started.  Yeah, we got the history run down in Wolfsbane, and then of course more in Bloodrose.  But to go back and actually follow the people from the history, well that is what makes me enjoy learning about REAL history.
So, knowing all this, at first, I was a little disappointed.  I don't know why, but for some reason my brain didn't think that we'd go quite so far back in time.  But once I kind of figured out that we kind of had to in order to get to the beginning of the story, I really got into the story and was hooked!  As with the original series, we have a strong girl as our main character.  Only now, we're in more medieval times, when women were expected to marry well to bring their family money and status.  Never should they be warriors.  And yet our main character is Ember, and she has gone off on her own into to practice with a fake sword, for as long as she could.  She could never let her family know, they wouldn't understand, and her father is a bit of a tyrant.  But her friend, the family friend, Alistair, when he comes back, now as a guard of the Conatus, he does know, and has always known she wants this.  Ember is promised to Conatus as repayment when her mother was having trouble giving birth to her, and they helped out. Her father does not want to lose her, it would be losing her possible marriage to another lord's son that would help his family.  But Ember cannot wait to be free and get the chance to do what she wants!
Her family is escorted to Tearmunn, where the "convent" or place of the Conatus is.  Ember must choose a path, the paths are between being a warrior, knowledge, and crafts. She chooses the warrior room, and soon must face a trial.  And the trial is something she never knew was real.  A creature, dead, yet living.  And she is able to defeat it.  When she comes out, she is welcomed into the Guard.  She now must train.  At first she believes she will be training with the other female guard member, Sorcha.  But when her father once again protests, Barrow says he will train her.  And now she is training with this man who she is in awe of.  He seems to be a great leader, as well as really know the way of a warrior.  As they train, she feels differently about him.  But she is not sure how.  Alistair surprises her by making a pass, saying he knows that this is why she became a warrior, so she could be with him.  This is of course not true, and her relationship becomes strained with him.
The Guard must fight many different supernatural creatures, as terrible things begin happening in the villages surrounding them.  One of the Conatus members is sucked in to the evil, by a name we've heard before, Bosque Mar.  He wants to make a deal to help the Conatus with these evil creatures, such as wraiths, again creatures we know from the Nightshade series.  We're left at the end with all of the Guard and other members of the Conatus having to choose to leave quietly to escape the evil that is taking over, or to choose to be a part of the new group.
And now, I have to read on!!  Can't wait for the next book in the series!
Posted by Lisa Mandina at 10:12 AM