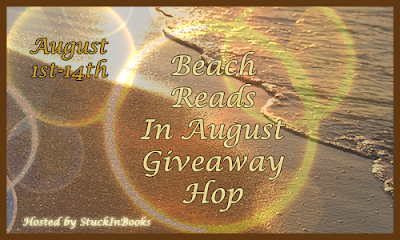 I feel like it's been a while since I joined into a giveaway hop, so here I am!  This hope is hosted by Val and Jess at Stuck in Books.  My giveaway is your choice of book up to $15 from The Book Depository.  So if they deliver to you, please enter below!  When you're done, hope along to the other giveaways in the linky underneath the Rafflecopter.

Review: The Raven King (The Raven Cycle #4) by Maggie Stiefvater 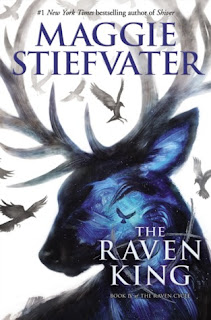 This is a book that I am going to have a really hard time reviewing.  I love this series so much.  I love this author's writing so much.  The first book, The Raven Boys, was so good and got me so in love with this series.  What was so exciting about that first book is that my last name was almost a character's last name in the book.  Don't believe me?  Too crazy?  Well here is a picture I took of the actual tweets with the author about it. 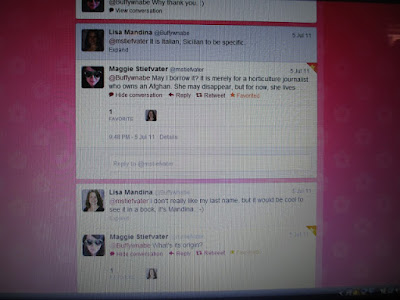 I try not to be too annoying, but it's hard not to remind her of this and say how sad I am that the character ended up on the cutting room floor whenever I go to one of her events.  Book 2, The Dream Thieves, also blew me away.  And again, book 3, Blue Lily, Lily Blue, just great, and I loved it.  Now, I will try really hard not to give any spoilers with this book for those of you who are caught up, but, I can't promise that for the three books before this one if you haven't read them.  So if you are behind, click on the links for those books and read those reviews first.  Just know that while this was a good ending to the series, it's almost like the amount of extra time between when it was due out, October 2015, and when it actually came out, April 2016, built it up too much in my head and I felt a little tiny bit of something missing for that wait.  But still, so so good, and you need to read the series!

But now, on with my review of this one.  The last book left off with such a sad place, the death of one character I'd grown to really like in the short time we got to know them.  Some new characters showed up, including Blue's father.  To learn exactly who or what Blue is, that was really neat and such a great surprise to me.  The daughter of the lost king, such a quirky character, which totally brought in something we'd been missing since the death or loss of other characters from before.  The tension in Blue and Gansey's at first hidden relationship, to the will they or won't they kiss, when we've all known what that kiss is supposed to mean for Gansey since the very first book.  We learn just how much of Ronan's life is a dream, or came from a dream.  And then there is Henry Cheng, I love his character, and what his past brings to the story really did add a whole other aspect that made the story even better.  Ronan getting a chance at love and happiness, well as happy as Ronan ever gets, that totally brought a smile to my face and made me so happy.  Of course there is the king to be found to see what kind of wish Gansey could be granted, maybe so he won't have to die?  And then Cabeswater itself is in trouble.  There are just so many strings that intersect in so many different ways that I can't even really tell too much about any one event without giving away another major event or plot line.

Here's my thought on how it all ended.  I feel like Maggie did a great job, believable, and perfectly normal for her type of world ending.  There are things about it that almost felt a little too easy to me, but I can't even explain what about it made me feel that way, so I can't even use that as a negative for the book.  I didn't have any trouble enjoying the book, to the point that as I read I wanted to know what was going to happen, but unlike the other books in the series, I didn't have problems setting it down and going on to do other things.  So there was something missing in that aspect I guess. But it wasn't the characters.  As usual, the characters were the best part of the story, and I will be sad to be done with them.  I know the story is over, but I could totally read on about their lives after it all.  Ronan and Adam, Gansey and Blue, and what about Henry?  You must read this series, and you must see how it all ends if you've read all of it so far.
Posted by Lisa Mandina at 7:00 AM

Discussion Post: To DNF or Not To DNF, That Is The Question - Or How Do You Decide If You Should Give Up On A Book?

Once again my discussion post has been pushed off until the end of the month.  And it changed topics several times.  But, I've seen a lot of other posts about DNFing, so I thought I would join in since I have some big thoughts about it too, and of course there will be gifs.  Today I've chosen a bunch of gifs from a new favorite show, Brooklyn Nine Nine.  Also, a reminder that the 2016 Discussion Challenge is hosted by Feed Your Fiction Addiction and It Starts at Midnight.  If you want to check out any of my earlier posts you can go to these links: 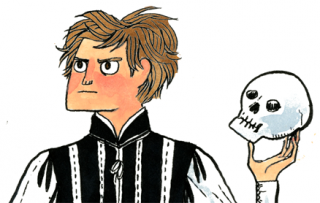 My title of course refers to Hamlet's "To be, or not to be" famous quote.  I often feel conflicted on whether to give up on a book.  There was a day though, before blogging, before working at a bookstore, when I didn't give up on books.  I either fought my way through to the bitter end, or I put a bookmark in it (yes, sometimes that was a folded page corner) and set the book aside to pick up and finish later.  Once Goodreads came around, I actually left those books on my currently reading shelf.  Until recently.  When I decided that having 20 books on my currently reading shelf was just silly.  So I moved those books to another shelf, the DNF one, or else I have another "series I may not finish" shelf on Goodreads.  My Goodreads DNF shelf has 68 books on it currently.

While it has gotten easier to decide to give up on a book due to all the other books I have to read just waiting on me, it still is never quite that easy.  When I have heard such great things about a book.  Or when I requested it on Netgalley or Edelweiss.  But I've also learned that I can still give those sites a review, and explain to them why I didn't finish it.  However, one thing is that I don't feel like I can give a review to other people if I haven't given it a fair chance.

The reason I don't do reviews on my DNF books is because I know that there are probably many other people who will enjoy the book.  But now, I begin to wonder if I should give more of a reason on Goodreads at least, to others looking to figure out whether they will like a book or  not.  So I guess one question I would like anyone reading this to discuss in the comments is about reviewing DNF books.  Do you DNF?  If you do, do you review them?  Whether you DNF or not, do you want to read a review of why someone did DNF?

The other question I have for discussion, if you do DNF, when do you decide to do it?  I've heard many different things.  Some do after 10%, others take their age subtracted from 100 and read that many pages first.  So far I haven't necessarily followed anything specific.  I do try to do at least 10%, but I go until I just can't keep reading, can't make myself read anymore without having to actually work to concentrate.

Please, chime in below and share your thoughts on this whole DNF thing with me!  I am always looking for any tips that make things easier, or make me feel better about doing something the way I'm already doing it.  And because I couldn't go without at least one Supernatural gif, here you go: