Book Review ???: The rest of the Sookie Stackhouse novels by Charlaine Harris 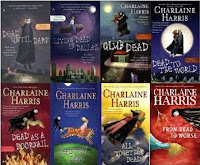 So, I've been kind of off my game in blogging this month. Which is kind of unforgivable as I've had many, many days when I had time to write. So I know I've left a few out that I've read, and I promise to make that one of my new year's resolutions for 2010, to actually blog about EVERY book that I read. So to probably finish up my blogging for this year, I have chosen to write one big post about #'s 3-8 of the Sookie Stackhouse series by Charlaine Harris. Those include:


Club Dead was good as I believe it is when Alcide was introduced, and for awhile you think he could be a good new guy for Sookie as Bill has betrayed her for his maker. I also enjoyed Dead to the World because we got to see Eric as a good guy who could really love Sookie. However, I missed his "smart-ass" self when he'd lost his memory, and was somewhat glad that he got back to the old Eric.

Dead as a Doornail was actually kind of boring to me, and I didn't enjoy it that much. So I moved through it quickly to get on to the next book. Although it is where we met Quinn, the next guy we though might be good for Sookie.

Definitely Dead was okay, I liked the trip to New Orleans a lot. It was very interesting to read about it, especially as it was pre-hurricane Katrina. I liked the bit of subterfuge Sookie had to use to sneak the bracelet back to the queen at the party at the end. Altogether Dead, now that was a book with lots of twists and turns, and I also liked how the author used Hurricane Katrina as part of the story. There were some parts in this book that seemed to be a little confusing, but it was good anyway. I did feel though that it was a way of bringing another disaster to mind, 9/11, but that's okay.

Now, at this point I can't remember when we first learned Sookie had fairy blood, but in From Dead to Worse we meet Sookie's great grandfather, and learn her family tree is not quite what she'd thought. Again, there are TONS of things going on in this book, while I enjoyed it, at times it got a little busy for me. It seems Bill is trying to get back in with Sookie, and not sure what is up with Eric. As I was reading through all these books over the past couple weeks, I began to wonder if Eric was Sookie's "Edward," thinking of my favorite series, the Twilight books. But I don't know. In this book Sookie decides Quinn has too much baggage with his mom and sister to be good for her. Sam also starts to kind of come up again as a possibility for Sookie. The queen dies, which is sad, but the new king sounds interesting as well. And poor Sookie now has 2 roommates. As I was reading some of the books before these last 2, I was relating quite well to Sookie and how she enjoyed going back to her own house after all her adventures and just having peaceful alone time. I've lived alone so long, that I feel the same. Vacations with family, well, I enjoy them, but often by the end I'm sooooo ready to get home and have no one else around. Although being snowed in, that made me a bit stir crazy this last weekend. Even getting out shopping by myself would have been nice. Hopefully I can do that this week.

I will wait till the 9th book: Dead and Gone, comes out in paperback to buy it and read it. For now I'm on to other books, starting with Stephen King's latest: Under the Dome. Although I'm a bit afraid of the book, it is HUGE! But I started reading it this morning at breakfast.

Book Review 53: How to Build a Dinosaur by Jack Horner

I first learned about Jack Horner when I was in college, then Central Missouri State University, now called University of Central Missouri. It was either my sophomore or junior year, I think the first time I took Invertebrate Paleontology. I say first time, because my first teacher was a horrible teacher. I had a C, he lost my final, which I felt like I'd done really well on, and told me I had a D. Since that was in my major, I had to re-take the class. I'm glad in a way that I did, because the my 2nd teacher was an awesome teacher and took me on my first "real" fossil expeditions. But I digress. It was about this time that the book Jurassic Park was a big hit, soon to be followed by the movie. My infatuation with dinosaurs was rediscovered. Around this time I asked for a book I'd heard about called "Digging Up Dinosaurs" by Dr. John Horner for a Christmas gift. Dr. John Horner is Jack Horner. I soon was to the point where I couldn't get enough nonfiction science books on dinosaurs and paleontology. My family of course noticed this, and the awesome college graduation gift I received was based on an article my step-dad found in the Kansas City Star my Senior year of college. In Montana, Jack Horner had a camp funded through the Montana State University where anyone who came up with the money and got signed up in time could come and work on an actual dinosaur dig. I got to go spend a week doing this the summer after I graduated. I still remember it all vividly, sleeping in a teepee. The pitch blackness at night, except for how bright the moon in the sky was. Being in a desert, yet wearing a sweatshirt on a July morning when we first went out to dig.

The money people pay for this, is one way they continue to fund their digs. And if I could, I would pay to go every year. I loved every minute of it. Except maybe for the bathrooms, and vegetarian dinner night. :-) A year ago, a new book came out called "How to Build a Dinosaur" by Jack Horner again. I asked for it last year as either a birthday or Christmas gift, but just wasn't quite in the mood to pick it up and read. I've kind of been in a nonfiction slump other than a few weight loss memoirs last spring. A couple weeks ago 60 Minutes did a story on Jack Horner, and basically what this book is about, and I remembered that book sitting on my shelf. I was also waiting for the final book on my Mark Twain nominee list to be available to check out at the library, and so was looking for what to read. And so I picked this up, and was again drawn right back in to this world I wish I was a part of every day of my life. Dr. Horner wants to create a Chickenosaur. Birds have been declared the descendents of dinosaurs, and so using a chicken and changing some things in its embryological development is where Dr. Horner sees us going.

Obviously there is much more to the book than I've laid out here, but I'll leave it open for others to read and enjoy. I will leave you with a quote Dr. Horner includes in this book by George Carlin. I'm not always a Carlin fan, due to some of his political comments, but this one sums up my views on global warming, and other environmental issues, as well as bringing to light the attitude that scientists in the geology field, which I equate myself with, have towards all these same things.

"Way over 90 percent of all the species that have ever lived on this planet - ever lived - are gone. They're extinct. We didn't kill them all. They just disappeared. That's what nature does. They disappear these days at the reate of twenty-five a day. And I mean regardless of our behavior. Irrespective of how we act on this planet, twenty-five species that are here today will be gone tomorrow. Let them go gracefully. Leave nature alone." - George Carlin

I actually have a few more reviews to do, but in the sense that I'm getting tired of typing, I'll come back and fill them in another day.
Posted by Lisa Mandina at 7:08 PM

This is the 2nd book in the Missing Series. The first was Found which was on one of my reading lists. Margaret Peterson Haddix is a favorite author of mine, especially her Shadow Children series. This looks to be another great series, and I'm thinking she can probably do almost as many in this series as she did in that one. In this book, the main characters have been sent back in the past to try to fix the past where 2 of the orphans were pulled before they could be killed. The kids of course save the day, but it is interesting to learn about the past and mysterious killings of future kings. I will definitely recommend this series to kids at the bookstore as well as at school. I look forward to the 3rd book where they kids will go back in time to save another "orphan" and bring her back to her current family. I like how the book brings in the future with the time travel, and also relates back to the past, and the way current children live.
Posted by Lisa Mandina at 7:02 PM

So this chick lit book I began clear back in August before I got selected to read the Mark Twain and Truman nominees. I didn't pick it back up until I was waiting on my last Mark Twain nominee to be available. This was a good book to start with. The main character is a woman, who basically has a man's attitude about sex and relationships. In fact she makes some men cry. I like the way she was able to do this. I like to pretend that I was kinda similar in my approach to relationships back in college. However, in the end, it really kind of did a real turn around. She met this guy, who was opposed to the reality show she had created called "Sex with an Ex". He's a hot guy of course, so she decides to follow him and try to convince him to come on the show. As you would expect, or wouldn't based on her earlier behavior, but would based on being a reader of chick lit, she falls for him. Turns out she falls head over heels. One of her friends says one thing, and she gives him up. She gets backstabbed in something you totally see coming, by him in a way, and then of course, she wants him and goes after him. We don't really learn why she is a "man-izer" until towards the end of the book with this guy. I don't know. It was an okay book I guess, but I don't like how she did a complete 180 and changed so much all over a guy. And the fact that the ending was so predictable was also disappointing.

Okay, as things have been hectic, I've got a couple more posts to make today!
Posted by Lisa Mandina at 6:46 PM