Review: The Rule of Mirrors (The Vault of Dreamers #2) by Caragh M. O'Brien 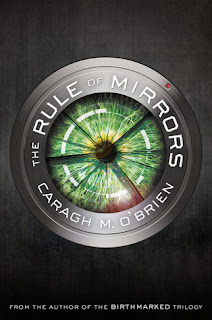 First, thanks to Roaring Brook Press and Edelweiss for allowing me to read an e-galley of this book.  I was lucky enough to get an ARC  of the first book, The Vault of Dreamers, and meet the author when I went to BEA in 2014.  So unfortunately I won't have matching ARCs since I only had an egalley of this, but hey, that's life!  I had skimmed a few reviews before I got around to reading this myself, and one or two of them made me a little concerned I wouldn't enjoy this one.  But actually, there were several things in this that I did like even a little better than the first book.  Now, obviously if you haven't read the first book, you need to stop reading my review now, because I can't keep from any spoilers for that book.  Go click the link above and read the review of the first book if you think you might be interested in this series.

We pick up with Rosie, but Rosie in two different places.  One of those places is back in a dream vault, like where we left off in the last book.  In the place where she still sleeps most of the time, there is a creepy guy who works there.  And this guy seems to be in love with her.  So she chooses to use this obsession of his to get him to help her get awake more often. To learn things about where she is and what is going on.  And eventually, hopefully, she can get him to help her escape.

The "other" Rosie is waking up in another girl's body, a pregnant girl's body.  Thea has been in a coma, and her parents have used the dream seeds suggested by the doctor to bring their daughter back, really they've wanted to keep her alive even with no hope, just to save the baby.  But when Thea wakes up, she's not Thea, she's Rosie.  The doctor has told the family that this happens sometimes, and that she will need to keep her in the hospital until it stops.  But Thea/Rosie is able to convince her parents that she will do better at home.  Before she leaves though, she is able to get back into the lab, and find lots of her dream seeds in jars.  And she meets someone else, someone she recognizes from her past, that now lends a whole other aspect to the story.  When she goes home with her family, to Texas, she meets the father of Thea's baby, and there is just an instant connection, seemingly out of nowhere.  Many other relatives are there as well, including her grandparents.  But Rosie wants to know about Linus, the boy she was in love with before, who also betrayed her.  She calls to try to talk to him, but of course she doesn't have Rosie's voice, it is Thea's voice, making him not believe it is her, even with the things she tells him that only the two of them would know.  She tries calling her mom and stepdad and little sister, but same issue, they don't believe her.

The "real" Rosie is able to escape when some things do happen that lead her to be able to sneak out.  At first she is able to get away with it, and the creepy guy doesn't find her.  She jumps into the back of a truck with two young women, and they promise to keep her at their home in secret for awhile, with the promise that she will let them claim the reward when she is ready to come out.  She also tries to contact Linus and others, and they do believe her.  But then Berg, the head of the school, contacts her.  And now she feels like she is no longer safe.  This is about the time she realizes that the creepy guy is out in his truck outside the house where she is hiding.  So she leaves, and goes with the creepy guy to try to get back to her family.  She finds that he has been stealing the sleep vials from the vault, and she steals some herself, to save to use for when they might be able to help her out.  Of course she must escape from him, but she doesn't trust Linus, not after his betrayal.  So she goes to another of her friends from the Forge school, Burnham.  Burnham lives in a very nice house, his parents being the ones who own the company that makes the drugs the Forge school was using.  Burnham wants to find out what exactly is being done, for his parents' company's sake at least.  So Rosie uses Burnham's computer hacking skills to try to figure more out as well as get help to get back to take her revenge on Berg.

I won't tell you anymore.  Just that Rosie will have to meet up with Linus, she will need him to do what she wants to do, plus, she still loves him, and can't resist going to him.  But will all of it be worked out?  Even if she can get in and get the proof, does Rosie now exist in two places?  Or will Thea ever be able to come back out and take her life back?  All I can tell you is that this isn't the end, there is going to be one more book.  And I need to know more!  I need to know how everything can be wrapped up.  It gets close in this book, but not all the details are wrapped up, and there is so much more to happen.
Posted by Lisa Mandina at 12:52 PM