A to Z April: X Reviews - The Xander Years by Keith R.A. DeCandido/The X-Files: Book of the Unexplained by Jane Goldman 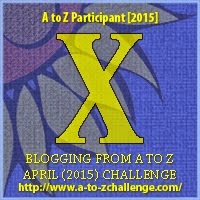 As you might have guessed, finding books for the X reviews was one of the hardest for the whole challenge.  I had about 6 to choose from and 3 were ones I had already posted reviews here on the blog, so I didn't want to do them again.  So the ones I've chosen are the other ones I hadn't reviewed for the blog.  And they are actually companion books to two of my favorite TV series. 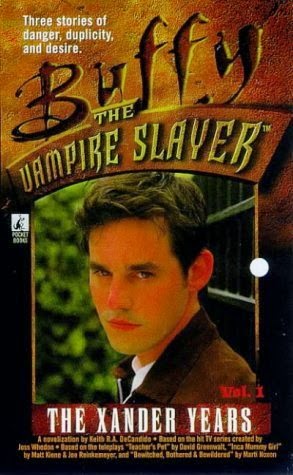 First is The Xander Years Vol. 1 by Keith R.A. Candido.  If they did a volume 2 to this, I didn't ever get ahold of it, not from lack of trying I'm sure.  As when I started working at a bookstore, I began trying to order every last Buffy  book I could.  Unfortunately many were out of print, and I didn't want to order from used at the time and pay ahead of time.  I became a huge fan of the name Xander because of this show, and if I'd ever had a son, I would have wanted to name him that.  Here is the somwhat long blurb for this book from Goodreads:
TONIGHT, PART 1The argument started when Cordelia saw what Xander was wearing.

He had only just walked into the Bronze when Cordy started in on him. "My "God, " what is that outfit?"

"No, "I'm" wearing clothes. "You" are wearing rags. Xander, do you even know what it means to accessorize?"

Shaking his head and rolling his eyes at the same time, Xander replied, "Yeah. "To accessorize." A verb deriving from the noun "accessory." Loosely defined as, 'Caring way more about what you're wearing than necessary for simple human interpersonal contact.'"

Gesturing as if she were pleading with Xander to not jump off a high ledge, Cordelia said, "Xander, clothes are what define who you are to the world. They put out a message that says, 'I'm cool' or 'I'm a jock' or 'I'm a computer geek" or in your case, 'I'm a loser with no redeeming social value.'"

It went downhill from there, at least up to the part where they made up by necking near the restrooms.

Xander returned home and fell more than sat on his bed, not even bothering to clear a space for himself -- he just collapsed onto the dirty laundry festooned on the sheets and stared at the ceiling. All in all, it had been a typical date: arguing for an hour, necking for an hour. "Not exactly how I pictured dating, he thought. Certainly not how all those fantasy dates with Buffy went in my head."

He turned toward the bedside table to stare at the photograph next to his clock radio. Willow's mom had taken that picture of Buffy, Willow, and Xander sophomore year. Buffy's hair was longer then -- so, if it came to that, was Xander's.

"Things were simpler then, hionship had been set.

Except, of course,for the necking part. That took another twelve years to develop.

The funny thing was, while Willow and Xander had gleefully formed the We Hate Cordelia Chase Fan Club -- they even held semiregular meetings -- Jesse had always had the hots for her, right up until the moment he died. And now Xander was dating her.

"Well, it could be worse, he thought. At least dating Cordelia isn't an immediate threat to my life. My sanity maybe, but not my life."

Shivering with a chill that had nothing to do with the typically warm Sunnydale night, he remembered a certain substitute biology teacher.... 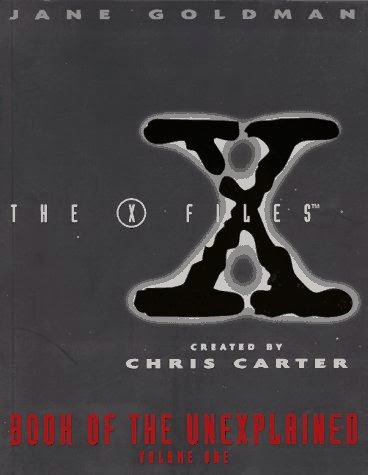 The 2nd book is from a TV series that I watched with  my mom, one that we loved and are excited to hear that there may be a reboot!  I was a huge X-Files fan.  Especially what they called the "monster of the week" episodes more than the mythology episodes.  These books, and I had two of them, were more about the true stories behind the UFO sightings and other wild stories that made up the TV series.  Here is a blurb from Goodreads:
At the beginning of its fourth incredibly popular season. The X-Files Fall 1996 season premiere had the highest rating Fox Television has ever achieved for a dramatic series. The show won five 1996 Emmy awards for special effects, outstanding writing, and best guest spots, and continues to garner new fans with each episode. HarperPrism is the only official publisher of The X-Files, and this season, we present three brand-new additions to satisfy the voracious appetite of the millions of fans.The facts behind the fiction are even more disturbing than the menace and mystery depicted in The X-Files episodes. Here are the actual accounts of UFO sightings, alien encounters, government cover-ups, psychic crime solving, faith healing, spontaneous combustion, reincarnation, and hauntings from which the show's writers draw their material for story lines. This in-depth, photo-tilled guide--complete with interviews from the show's cast, crew, and writers, as well as astonishing revelations from the world's leading investigations, scientists and officials--tells the terrifying stories behind our real life encounters with The X-Files.

Were you a fan of either of these shows?  If so, did you ever read any of the books that went with them?  Or did you even know they had books to go with them?  And while you're here, make sure you enter my giveaway below!