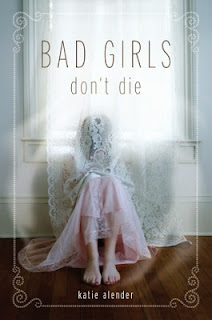 I'd seen these books on the teen shelves in the bookstore where I work for awhile, and always wondered.  Then last December I went to the Scholastic Warehouse sale and got it for half price, which was a good deal.  I finally got around to reading it this past week, and all I can say is, I can't believe it took me so long!  This was a book that hooked me, and when I'd pick it up and say I was just going to read a little bit, I'd get so into the story that when I looked up to see what time it was, I'd read longer than I planned!  In fact it was so good I had trouble finishing the e-galley that had a deadline before I finished this.
The main character is Alexis, and she lives in a really cool, but really kinda creepy house.  She's kind of one of those girls who are goth, but not really, but she isn't a fan of the "in crowd", like the cheerleaders.  Especially since one year they made a slide show about being healthy, and featured her best friend as the before picture in a fat slide, and made her move away.  Alexis likes to take pictures, in fact her cool house has its own dark room so that she can even develop her own film.  And she does that, doesn't use the digital cameras, does it the old fashioned way.  Her family is interesting.  Her dad seems to hardly be there, as well as her mom who is trying so hard to get ahead at work and get a big promotion that she spends all her time there, and when she's home she's doing things to help her get ahead at work.  Alexis is a high schooler, I'm guessing 15 since she doesn't really drive.  She has a younger sister in middle school, named Kasey.  Kasey has been getting weirder every day.  At first Alexis just thinks it is part of being a middle school age.  But when she hears a rumor from one of the hated cheerleaders at school, about how Kasey's friend, the cheerleader's little sister, actually got hurt at their house because Kasey hit her over a doll, she starts noticing other weird things going on in the house.  Like when her sister wanders to the basement for like no reason, she goes down with her and tells her a story.  A story that is kind of creepy and just comes to her.  Kasey has been also getting really obsessed with dolls as well.  And soon Alexis notices that Kasey is acting weird, the way she speaks, walks, and even thinking her eyes are green instead of their normal blue at times.  While all this is happening, one of the cheerleaders, Megan, seems to know what is going on, and reaches out to Alexis to help her.  And then there is a boy at school, Carter, the class vice president, who seems to kind of like her, and he is cute.  And when she is around him, they seem to get along seamlessly.  Things at home get scarier, their father is in a car accident that the police soon say isn't an accident.  And then Kasey says she is going to tell the police that Alexis did it.  They find a connection between the house and Megan.  And in the end, Alexis must get through all the history of the house and the town, and even her family, in order to try to save her sister, and stop anything bad from happening to anyone else in the town.
I loved the main character, which normally I don't always like the girls who are so anti-social, but this girl wasn't the kind that irritates me.  She was snarky and sarcastic in a way that I know she's someone I'd like to hang out with.  And the meet cute with Carter, and really just all of her relationships were pretty realistic to me.  A fun, but spooky, and well set up ghost story, and I can't wait to read on.  I have the 2nd one from that same book sale.  So will just have to find the third one when I get to it!
Posted by Lisa Mandina at 6:28 PM