Because it is My Blood (Birthright #2) by Gabrielle Zevin 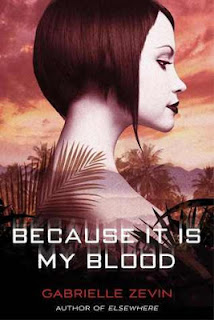 You know how sometimes I've talked about how the 2nd book in a series is slow and hard to get through?  Not true in any way, shape, or form for this book!!  I was sucked right back in!  I just love Gabrielle Zevin's writing style I guess!  And of course, if you haven't read the first one yet, there will be some spoilers here, but I'll try really hard not to make them anything horrible!!
So, anyway, we begin with Anya back in the Liberty Children's Facility for shooting Jacks, who had shot Win.  When she leaves, Mrs. Cobrawick gives her a funny speech about how it would be good to remember what she's done for her, how she let Win visit, even though she had been instructed by his dad Charles Delacroix to alert him if he showed up, and that they could then extend her sentence.  She's also made a friend of her roommate, the same one as last time, who goes by Mouse.  And Mouse asks if after she gets out, maybe Anya can get her a job doing something for her family.  Gable and Scarlet are dating, hard as it is for Anya to believe.  And Win  has moved on. She thinks, with Alison Wheeler, a friend of the family, appoved of by his father.  Anya finds out from her little sister Natty's teacher that she is basically a genius, and they want to send her to a special camp to help her continue learning and be able to help come up with solutions to the problems facing the world.  While Anya is nervous at first, she only wants what is best for her.  With Leo gone, hidden in Japan by Yoji.  Her family is now still wanting her to help and take over, along with Yoji.  But she doesn't want to, she wants to go back to school and graduate and then go on to college.  But it's hard to get into any of the schools.  And soon all kinds of things seem to happen that mess up Mr. Delacroix's bid for District Attorney.  Thanks to an anonymous donation to her old school, Anya is able to get back in, where her sister has skipped ahead two grades and is not in the lower school anymore.  But as these things keep piling up making Mr. Delacroix lose more and more ground in his campaign, the worst seems to happen.  Even though Win and Anya are not dating, when Win shakes her hand at lunch one day, a picture is taken and it looks as if they are back together.  Suddenly Anya is taken back to Liberty Children's Facility for supposedly violating the terms of the deal.  And she is then sent straight back into the hole she spent time in before.  When Mr. Delecroix comes to see her, he offers her a choice to leave, to get out of town.  Well, kind of.  Technically it is her lawyers that figure while she is sick and in the infirmary they can sneak her out of town.  And an elaborate plan does it, and she's off to Mexico.  She stays on a cacao farm with part of her cousin Mickey's wife Sophia's family.  And she grows to love chocolate again.  She has no idea how long she'll have to stay there.
Until she is forced to leave by an attempt on her life, and on Imogen, the nurse still staying with her sister, as well as on her brother Leo in Japan.  With funerals and other problems, she comes home, and makes a deal with the new district attorney, who is as crooked as the one before.  Mr. Delacroix has lost his bid for the job, and now she and Win can be together.  Especially once she learns that he was only with Alison as a cover to try to help his dad's campaign.  Lots of intrigue in this book.  Who is actually behind what?  And who can Anya actually trust?  And at the end, will Anya's idea for the family business be successful?  Or will it put her and her loved ones in more danger.
I won't go on about anything else.  You need to read it, and I don't want to spoil it.  But I will say I loved learning about cacao right along with Anya.  I have always actually been fascinated with cacao beans.  Or chocolate anyway.  And I love that the recipe for the hot chocolate we hear so much about in this story is at the beginning of the book!  One other thing that really was cool is that at the end of the book the location that is talked about seems to be the library in New York City with the lions in front of it, one I have visited, the one that Carrie was going to get married at in the Sex and the City movie, and even of such fame as from the first Ghostbusters movie. 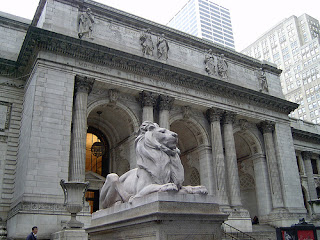 Now, as I said before, I have both of the books in the series as ARCs, even this one that is autographed.  So it would be so cool if I can find an ARC of the final book to make a complete set!  Since I put my picture of myself with the author in the last blog post, this time I'll share a photo of how she autographed this book for me at BEA last summer. 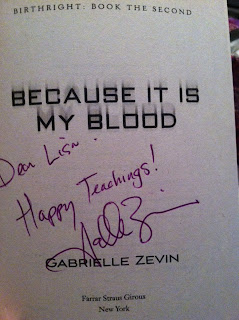 Email ThisBlogThis!Share to TwitterShare to FacebookShare to Pinterest
Labels: Because it is My Blood, Birthright series, chocolate, dystopian, Gabrielle Zevin, Library, NYC