Loss (Riders of the Apocalypse #3) by Jackie Morse Kessler 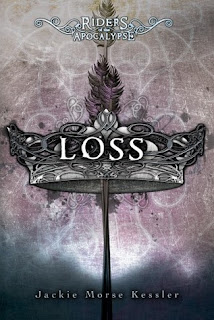 I started out thinking I'd like this book a little more than #2, Rage.  Loss is about Pestilence, the bringer of disease. The main character is a 15 year old boy named Billy.  At first I figured it would relate to his grandfather who had Alzheimer's.  But then we learn that Billy has been bullied his whole life.  In fact he has just given in, and just hopes when they do whatever they're going to do with him, that it will end quick and without visible bruising that he would have to explain to his mother.  His best friend is a girl named Marianne, that he is beginning to like more than a friend.  But he doesn't want to lose his friendship with her, so he keeps it to himself.  Billy has a nightmare of someone he calls the Ice Cream Man from when he was like 4 years old.  The man offered him a ride on his horse, if he would do something.  Because Billy agreed, turns out he was tricked into taking over the job of Pestilence.  But Pestilence isn't actually dead.  He's gone off and disappeared.  To the point that he's not able to be found.  He's lost in his memories.  Death comes to Billy and gives him a choice.  He can either take over the job or he can help Death get Pestilence back to work.  So Billy ends up being sent into the White King's dreams and memories to try to find him.  But not before Billy gets the chance to wield the Bow on some of  his bullies, causing them to get sick and run off.  Once in the head of Pestilence, Billy begins to get lost.  Some memories play over and over.  And Billy has to try to figure out how to find him.  When he does, and pulls him back out into the world, Pestilence has decided he's seen the end of the world, and there is no use fighting it.  So now Billy must help take care of this problem, even if it means killing him.  Which could in turn end up in Billy's death as well.

Not that the story wasn't good, it was.  But it just seemed so all over the place.  While that makes sense since this Pestilence has been around for a long, long time.  Sometimes it just got to be too complicated.  It was interesting to hear about past Riders, before the ones we now know.  It also was neat to hear about how Death looked at those times, and to find out what Pestilence thought of Death and the apocalypse.  Throughout the last two books, Death has been sure to assure the new Riders that they aren't necessarily there to bring about the apocalypse, but to keep balance in the world in order to maybe prevent it?  It's an interesting take on this idea.  Now, I can't wait for the 4th and final book to come out, Breath.  In fact, that'll be my WOW post tomorrow!  And once again the author is donating part of the proceeds from people who purchase the book to a charity, in this case it is to the Alzheimer's Association.  And it is a good deal on these books.  This one cost $8.99, and knowing that part of the cost goes to such worthy charities makes it so easy to go buy these books.
Posted by Lisa Mandina at 5:46 PM