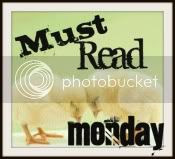 Just found this meme through someone I follow, and it is sponsored by Fans of Fiction. It is called Must Read Monday, and I love the creativity behind it! You pick a book based on whatever the theme is, and you explain why it is a must read. But you must explain it using an acrostic poem. This week's theme is paranormal, which can include paranormal romance. I just read a really good one I'd like to share, but since the title is so long, I decided not to do it for my first foray into this meme. Instead I'll go with another really good one I read this past spring. I chose Abandon by Meg Cabot.

Ancient stories of the underworld

But who really believes in them anymore.

Near death, but she came back

Doing her best to move on with life isn't easy, so she moves to her mother's birthplace

Oh but still he finds her, and still he wants her to come live with him

Now she must decide her own fate.

Wow, now that I do this, it might be easier next time to do a longer title to fit more in. Hope I've given some idea of the book with this poem. It was fun if anything.