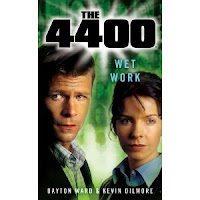 This book is the one I kept in my car for those times when I was somewhere that I needed to read something and didn't remember to bring a book. So I started it quite a while ago.

The 4400 was a show I liked on tv that was cancelled after only a few years. It started out with a great premise, but as many of those types of shows tend to do, it got bogged down into what I call the "mythology" of the show.

This was a good representation of what an episode of the show could have been about. An internation assassin known as "the Wraith" was one of the people taken, she disappeared in 1992. One of our main characters, Tom Baldwin, was actually part of finding her on one of his first cases. When she comes back with the rest of the 4400, she immediately disappears. She had actually planned on that last kill to end her career anyway and retreat into oblivion with her girlfriend. When she comes back, it seems someone from the future, which is where the 4400 have been sent back from, has chosen her to be an assassin for them, to kill other 4400 members who might be messing up the plans. She of course has her own kill list, the people who assigned her all the jobs in the past, who she knew would want her back so that she couldn't incriminate them in these illegal political assassins assigned by the CIA.

As I read the end of the book about the authors, it was very interesting to note that they are both Kansas City residents, or were at the time of the book. I found that cool!
Posted by Lisa Mandina at 5:00 PM

Email ThisBlogThis!Share to TwitterShare to FacebookShare to Pinterest
Labels: CIA, science fiction, The 4400