Love in Due Time, an all-new second chance romantic comedy from L.B. Dunbar is available now! 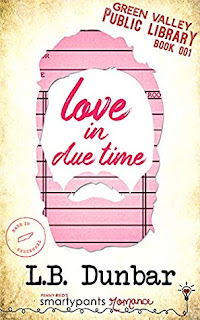 Naomi Winters will be forty—soon-ish—and she’s only been with one man. One night. One time. Long ago. She believes everything happens for a reason, and the universe spoke about Nathan Ryder.

Nathan Ryder isn’t the same man who hightailed his bike out of Green Valley eighteen years ago. As a rule breaker, women are one area he acts a fool. Case in point…the local librarian. He can’t get a read on her, but she’s one risk he’s willing to take. Again.

What do an eccentric librarian and a sexy silver biker have in common? More than you think.
The due date on their love might not be expired after all.

'Love in Due Time' is a full-length, contemporary romantic comedy, can be read as a standalone, and is book#1 in the Green Valley Library series.

My Review:
As a librarian, I knew that I had to read all of the books in this series. And one thing that got me from the very start was how each chapter began with a Dewey Decimal number and a definition for what it was.   I also really liked that it was an older couple, but the woman was still single and never been married, as that totally is me in a way.  We got a lot of the whole Green Valley world with favorite characters such as the Winstons, Deputy Jackson James, and the Iron Wraiths. Of course with this being a librarian as a main character, another thing that is a connection for me, we got lots of talk about Bethany Winston, who we know and love from the Winston Brother series.  It was so realistic seeing a library have to struggle for funds, sad, but real.  And even more real was having the one librarian that had been there forever and who was struggling with all the changes going on as libraries evolve over time.  Part of the older couple romance I enjoyed was that Naomi was still somewhat innocent.  While I don't completely connect to that from my past, these days, as long as it's been for me, it totally reminded me of myself there too.  I love how she kept saying she was going to be bad at things, and that Nathan would at first take it as she was "being bad", like naughty as opposed to not being good at whatever it was.  And not that she was bad, he enjoyed it all just fine.  The romance was sweet, the steamy scenes were hot, and I really did love the whole world.  I don't have a problem with the Wiccan aspect of the story, just didn't quite care for as much of it as there was, almost like any other religion becoming too much a part of a story in a way for my taste.  I'm very excited to go on with this series in the SmartyPants Romance books.  Also, call me crazy, but I would kind of like to see Jackson James find an HEA one of these days.  He might be a little smarmy, but I still kinda like his character, and he's not all bad.

Excerpt
“Naomi?” My hands cover her shoulders, holding her steady.

“This is all my fault.” Her eyes widen, the widest I’ve ever seen. Panic fills them.

“I … I can’t believe this happened again.” Her hands come to my chest, and she gently pushes at me. “You have to get out of here.”

“What?” My brows pinch at the harsh tone.

“You need to go. I can’t be near you.” Her voice struggles to stay level.

Ouch. That stings a little.

“Why?” I take one step back under the force of her hands.

“Lady, what are you talking about?” My voice roughens.

“Bad things always happen after I’m with you.”

I stiffen, straightening to my full height. My arms cross and I glare down at her. Saying such a thing is just downright mean. Her head shakes as her fingers curl along the open edges of my work jacket. Suddenly, I feel like she’s tugging me to her instead of pressing me away.

“When I’m with you, something happens. Something bad.” Her breath catches. “Because we kissed, the library is closing.”

I stare at her. She can’t be serious, but I see the hysteria in her eyes, like a rabid, trapped animal. She actually believes what she says.

“Well, we didn’t kiss,” I remind her, my tone stern and condescending. “I kissed you, remember? And you didn’t kiss me back, so I don’t think it counts.”

She glares up at me, her fingers still gripping my open jacket. Her shoulders fall, her head lowers, and it’s as if I can visibly see her relax, like water cascading down a building, washing over her.

“I didn’t kiss you back?” she questions and then her head pops up again. She nearly shrieks with the hesitant realization. Commence inhaling, like she’s winding up again. Full steam ahead.

“I didn’t kiss you back,” she repeats, her excitement growing. Another exaggerated inhale.

“I didn’t kiss you back!” Now, she’s just downright gloating, and the engine’s ready to blow.

“You don’t have to sound so pleased,” I murmur. I glance up and notice Mrs. MacIntyre watching us through the window of the librarian’s office behind the check-out counter. Her eyes narrow and I’m certain we’re making too much noise for her liking.

“I … I’m so relieved,” Naomi admits, her head falling forward, her fingers loosening on my jacket. Then her face turns up again. Her lids lift, slow and lazy. Her mouth curls in sweet relief, and she pulls herself up on her toes by the open edge of my jacket and does the damnedest thing. She kisses me.

About L.B. Dunbar
L.B. Dunbar loves the sweeter things in life: cookies, Coca-Cola, and romance. Her reading journey began with a deep love of fairy tales, medieval knights, Regency debauchery, and alpha males. She loves a deep belly laugh and a strong hug. Occasionally, she has the energy of a Jack Russell terrier. Accused—yes, that’s the correct word—of having an overactive imagination, to her benefit, such an imagination works well. Author of over two dozen novels, she’s created sweet, small town worlds; rock star mayhem; MMA chaos; sexy rom-coms for the over 40; and intrigue on an island of redemption. In addition, she is earning a title as the “myth and legend lady” for her modernizations of mythology as elda lore. Her other duties in life include mother to four children and wife to the one and only.