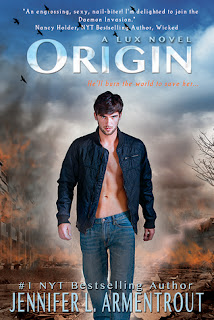 So, didn't realize that the next book after this wasn't Oblivion, and when I finished this and realized I didn't have the next book, I was a little upset, as this cliffhanger was a really big one!  Well, to me anyway.  This book is now on my stack to go with me in September to NOLA StoryCon when I should be getting to meet this author finally.  I'm still so in love with Daemon, and of course Katy is, hmm, my spirit animal?  My fictional wannabe?  The book blogger that her character is makes me so happy to read about her, even if she doesn't really get do do much of that in this book.  Of course if you haven't read all the books before this, you should go back and read those reviews first, Book 1:  Obsidian, Book 2:  Onyx,  and Book 3:  Opal.  Book 3 definitely left with a bit of a cliffhanger, and that is where this book picked right up basically.  So here I go, spoilers galore for anyone who hasn't read this far in the series, so stop now if you don't want them, this is your last warning!

When we left off in Opal, they had been able to rescue Dawson's human girlfriend, Bethany from Daedalus. But in the end, Katy got trapped and she was stuck there.  The first thing Daedalus does is move her to a different location, basically Area 51. There they test her and examine her, and subject her to fights with other hybrids like herself. But she refuses to fight them.  And it ends up getting her pretty beat up.  It keeps going until they bring in Blake.  Blake who she hates for all the betrayal he's been responsible for.  And the fight with him, and the things he says to her to get her mad, they make her training turn the corner.  And once that fight is over, they come to see what her powers really are, and she starts to learn more about the facility she is in.  The title of the book has to do with other alien/hybrid types of people there, that they call the "origins".  Within the facility she has a guard, named Archer.  And he is the only one who seems to care anything more for her than as a testing specimen. And soon she finds herself talking to him and asking him things about what is going on.  He fills her in to a point, and talks with her to a point, but he is still working for Daedalus, and will only go so far.

In the meantime, Daemon was taken home by his friends and family and they try to keep him there, try to keep him from getting out, because they know the first thing he will do is go to find and save Katy.  And of course, when he gets out, he does.  He doesn't just go running off by himself.  First he stops by Luc, the hybrid who helped them in the last book, and asks why he did what he did, and what he can do to help him get in to rescue Katy.  Luc agrees, but only if Daemon promises to get a hold of some kind of formula that has been created by Daedalus.  It is one that they are working on to try to help the hybrids they make survive longer than most of them seem to be able to.  It's not only for that though, it can also heal sick humans, sick with cancer, etc.  Daemon's  next step after the promise of help, is to get himself caught. And when he does, they do bring him right to Katy.  And he is so angry when he sees just what she has gone through physically.  While they give them time together, they put them in separate rooms.  Katy and Daemon know that their rooms are bugged, but the bathroom seems to be safe for talking.  And they meet in there to make plans often.  Once Daemon is there, they run more tests.  Tests that require Daemon to heal Katy from extremely life-threatening injuries.  And once they know that works, they try to move on to other tests.  It seems they may even be okay with Daemon and Katy hooking up and procreating.

Eventually, with the help of someone unexpected, as well as the dangerous Origins, they are able to get to their friends to try to figure out a way to keep themselves safe.  Or at least they try to come up with a way.  Because in Daedalus,  Katy learns that there are some of the Luxen that want to take the Earth away from the humans.  And supposedly there may even be some in Daemon's friends and family that are on that path.  Whether he knows it or not.  And so of course there will come a betrayal, even as the only way they can think to possible be safe is to try to go public, show the world that they exist.

There are all other kinds of events, smaller ones, not so huge of events.  There is something going on with Dawson and Bethany, and I pretty much figured it out right away.  And Daemon decides he is ready to go to the next level in his relationship with Katy.  And I love it.  I can only hope that things will go well.  I've got the next book ordered from the bookstore where I work, and can't wait to move on to reading it!
Posted by Lisa Mandina at 7:00 AM