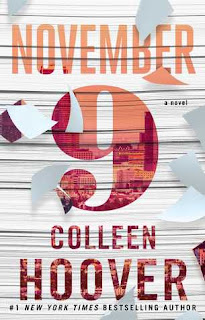 This is going to be a hard review to write because of the amount of love I have for this book, not to mention just how much of a book hangover it gave me, one that I still get twinges from once in awhile.  This was the last audiobook I checked out from the library.  It was my first experience with this author.  I have never really thought that I wanted to read her books. They just didn't sound up my alley.  But for some reason, the synopsis on this one just totally caught my attention.  Here, let me share it:

Beloved #1 New York Times bestselling author Colleen Hoover returns with an unforgettable love story between a writer and his unexpected muse.Fallon meets Ben, an aspiring novelist, the day before her scheduled cross-country move. Their untimely attraction leads them to spend Fallon’s last day in L.A. together, and her eventful life becomes the creative inspiration Ben has always sought for his novel. Over time and amidst the various relationships and tribulations of their own separate lives, they continue to meet on the same date every year. Until one day Fallon becomes unsure if Ben has been telling her the truth or fabricating a perfect reality for the sake of the ultimate plot twist.

So, I think that it has to do with maybe the author and his muse bit.  Or the fact that it sounds a bit like the book/movie One Day.  Only, this book, THIS BOOK!  I don't know how I can express just how much I loved it.  I listen to audiobooks in my car, or when I'm on the treadmill.  That's it.  There have been times that I've sat in my car a few more minutes just to hear a little bit more of a book that was really good.  But this one, it sucked me so far into it, that I just couldn't stop listening.  The 2nd to last day I was listening to it, I was at the gym on the treadmill.  It was a bit awkward at first because I was listening to a part that made me want to cry.

But then, as I kept walking, and the two girls on either side of me left and then two guys began using the treadmills on either side, the story changed from sad to sexy.  Yeah, that was a bit awkward!

Then, the day I finished it, I had about 40% left in the book when I had to get out of my car and go into work that morning.  I couldn't even imagine picking up my e-reader to read the book I was in the middle of reading on it.  So I had to drive out and get lunch.  And not just go and get lunch and go back to work.  No, I went to Sonic, and that way I could sit in my car and eat and listen.  Still getting back to work after lunch was hard.  So on the way home, I went 15 minutes out of my way, just to keep listening.  And I still had to know how it all would end.  So I went into my house, I didn't turn the tv on like I normally do first thing.  I ate my dinner listening to the audibook. When I was done with that, I sat on my couch and listened for 40 minutes until I finished it. Can I just say that I love this book?  I don't think I can express how much, but I do. Sooooo, soooo much!

Okay, let me give you my summary of the book.  There are two main characters, Fallon and Ben.  Fallon is a girl who was burned in a fire when she was 16 so badly that she now has scars down one side of her body, including her face.  At the time she'd been a star in a tv series, which all changed once the fire happened.  She is meeting her dad for lunch, on the anniversary of the fire, November 9 if you couldn't guess.  The fire took place at his house.  And for some reason, he had forgotten she was there that night and so didn't go to save her.  No one knew to get her until they heard her screams from inside.  On this day she is going to tell her father that she is about to move to New York City.  Her father is kind of an ass though.  When she tells him that she wants to maybe try out for Broadway plays, he basically tells her that because of her looks now, she should know better.  There's this attractive boy, Ben, that Fallon had seen sitting at the booth behind their booth when she'd gone to the bathroom earlier.  It's after one of these things her father says that Ben slides into her side of the booth and puts his arm around Fallon, then acting as if her is her boyfriend.  He helps her kind of tell her father off, kind of puts him in his place.  Fallon goes along with it, wondering what in the world is going on.  Soon her father leaves, and Fallon and Ben decide to hang out for awhile before she has to get on her plane to go to NYC. There's something about Ben.  It's like he doesn't see her scars, or like he thinks she is beautiful, not in spite, but because of them.  He does a lot for her confidence, and they  have a lot of fun being pretend boyfriend-girlfriend for the day.  But Fallon doesn't want to get into a relationship now, in fact she doesn't want it until she is 23 because of what her mother has told her about being old enough to really know yourself and be ready.  So the two agree that they will only see each other on November 9th each year.  They won't talk to each other at all throughout the year.  No phone numbers, they block each other on social media.  They only know that they will meet the next year at the same restaurant at about the same time as this year.  And so goes the story.

We get parts of the book from both Fallon and Ben's viewpoints.  So it is great to kind of see what each of them is going through.  We get more from Fallon until the end.  Each November 9 is so different. Each one brings so many different feelings as I read.  The first one goes so well.  The 2nd one, wow, sadness, happiness, and then more strong feelings as decisions must be made.  But then the 3rd one comes and there's so much hope for it to go more like the 1st one, but it doesn't.  Again, as they say, this one has all the feels.   And the 4th one, looks like maybe it won't happen.  But what does happen, again, happiness, that sexy time I talked about above and then, a major cliffhanger on what will happen for the final November 9. And that my followers, that is the part that I couldn't stop listening to for the last 40 minutes of the book.  I can't tell you much more without giving things away.  Just that Ben is really the perfect guy.  The way he loves and treats Fallon.  But his secret, I thought maybe I might know what it was at the beginning, but when nothing happened to even point that way, I figured I must be wrong.  In the end, it was basically what I'd thought.  But the way it happened, and how Ben told about it, incredible, emotional.  And Fallon, even when she should have hated him, or totally given up on him, the reasons she didn't hate him, or didn't give up on him, so perfect, in my opinion, so right, so much the way I believe I would have chosen, or anyone should have chosen.

I wish so much that they would make a movie of this.  While I pictured Ben from the description, I need to SEE him.  I just do.  I need to own this as a movie.  A movie to watch to laugh, to cry, to feel the heat between them.  I have to stop now.  I could go on and on.  But hey, if this book sounds good to you, I do have a giveaway going on up until Valentine's Day that you can enter to win it, just go to the post HERE.

One way to tell my  love is the fact that I had to use Supernatural gifs in my review.  So one more to leave you with for this review.