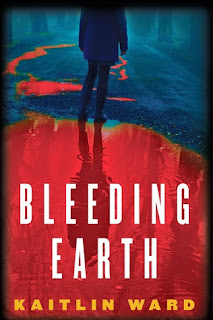 Thanks to Egmont USA and Netgalley for allowing me to read an e-galley of this title.  As I go to write this review, I see that it may not actually be released until next February, even though I originally had it down as coming out in August.  But anyway, I have to say that I really enjoyed this book.  While it really was mostly about the relationships  between the people in the story, it still had enough of the science fiction story tied in to keep it from being just about the people. And that is exactly how I like stories like this.  It didn't get quite as much into the science of what was going on with the disaster, and while I also enjoy that with my science teaching background, I also think for some people it can drag a story down.  So I think the author did a great job with balancing all parts of the story.

The main character is Lea.  When the story starts she is in a cemetery with her best friend finishing up some headstone rubbings for a school assignment.  They see blood just pooled up, as if it is coming up through a crack somewhere in the earth.  But not that much. Just one location really.  Soon after they each get home, the blood starts to cover the earth, and not just in Lea's town, but all over the world. At first it is just a think layer covering all the ground, but soon it gets deeper, and after that there seems to be something else that shows up in it, hair, human hair as determined by scientists.  Following that, there are bones.  And while the scientists don't seem to know what is going on exactly, at first they feel it isn't anything that will cause harm to humans.  But even that changes when they suggest wearing respirators.

Lea has a crush on someone who isn't in her circle of friends, a girl named Aracely.  While Lea is out and not worried about her sexuality, Aracely hasn't let people know yet.  So far their relationship seems to be going really well though.  But the blood and other things happening will, of course, put a bit of a hitch into it.  First there is school being cancelled so that they don't get to see each other every day.  And because Lea's parents know she is gay, they won't allow her to go over to Aracely's place without an adult there, or if she comes over, the door must stay open on Lea's bedroom.  She also starts having problems with her best friend, again due to things that seem to happen because of the disaster going on.  Lea's dad works at the local dam for the small town they live in, and so far, they are keeping it running enough to keep the power going for their town.  But there comes a time when her father is unable to come back from the dam every day, he's working longer hours.  And her mother seems to get a little extreme, boarding up all the windows and doors.  Lea doesn't know whether it is to keep the dangerous people out, or keep them in.

Honestly, as I said, this was a very good story.  I feel that the relationships were all very realistically done.  I loved the relationship between Lea and Aracely, with each of their statuses being the way they were, it made a lot of sense how they each dealt with the things as they happened.  Although there was one part later on in the story, when Lea is goofing around with one of her long time friends, a girl, and Aracely happens to see them with Lea kind of having her arms around the girl, and Aracely misunderstands what is going on.  I feel like that was a little unrealistic, knowing how Lea was, and how she and Aracely really knew each other. But it fit in well to add some drama for the next part, so I guess it worked in that way.  I think this is a great book to add to the growing list of teen LGBTQ books that are available.  And I will recommend it as such.  Also a great science fiction, apocalyptic type of story.  And an ending that kind of ties things up, but is realistic with who doesn't make it, and how those that do make it are able to make it.
Posted by Lisa Mandina at 7:00 AM