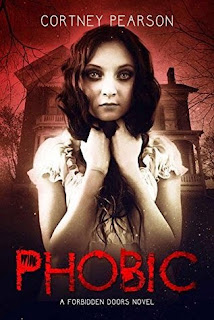 First thanks to Netgalley and Victory Editing for allowing me to read an egalley of this.  I didn't get to it until just now, but I'm glad I picked it out to read.  There were some issues with the story, it wasn't perfect. But it had a lot of unique bits while also being reminiscent of other scary books and movies.

The main character is Piper.  She lives in a very weird house, doors that open into nowhere, stairs that go nowhere, it makes lots of noises and does other strange things.  But not only does she have a weird house to deal with in her life, her mother is in prison for murder, and her father has recently died.  Her brother is taking care of her, but doesn't seem to really "get" her, or really be the kind of a parent she needs.  She has a best friend named Todd. But other than Todd, the people at school are cruel to her.  She's been bullied since the day she moved there.  After her mother went to prison, her father had the house moved, the whole house.  She's lived next door to Todd since they moved, and has been best friends with him since then.  Only now he's gone out for sports and has made friends with the guys on the team and their girlfriends.  Some of the kids who have treated her the worst, really picking on her about her acne among other things.

Things have kind of changed recently as well.  Her brother has started acting really strange, and the house has even done stranger things. When Todd tries to get Piper to be friends with his new friends, he invites them to her house for a party.  But they show up the day before, and the house seems to take note.  It seems as if at times the house protects Piper.  Even though she begins seeing ghosts, like a loop in time of a maid and the former owner of the home, as well as another servant, all somewhat a part of a strange love triangle.  But not only does the house protect Piper, if something happens to the house, she is now feeling it and getting hurt.  And then, her brother disappears.

Piper must solve the mystery of what the ghosts want, maybe she can send them on and save her life.  Not to mention finding her brother and saving him from what could be happening to him.  She has to try to convince Todd of what is happening and that she isn't crazy.  And she has to try to do all this before the house and the ghosts in it take her life and her brother's as well.

Like I said, there were definitely some parts of the story that were familiar, but the being connected to the house to the point that if someone hit or kicked it then it felt like they'd actually done that to Piper was one unique bit I felt.  The whole back story of the house was really involved and pretty spelled out.  I liked it.  I was glad to see that the ghosts, even the good ones, might not be as perfect as you thought they were.  And I even liked the relationship between Todd and Piper, once I figured out just what he was doing.  I see there is going to be a sequel, and I will be on the look out for it in the future.
Posted by Lisa Mandina at 4:27 PM