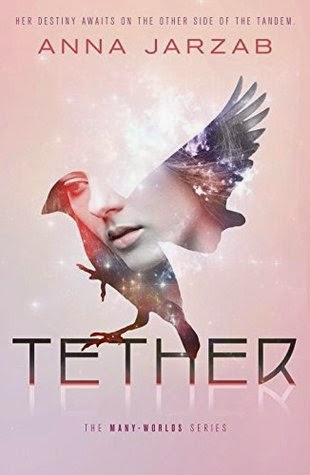 First, thanks to Edelweiss and Delacorte Press for allowing me to read an e-galley of this.  I read and enjoyed the first book, Tandem, also as an e-galley, and so was excited when I found this available on Edelweiss last year.  It has been awhile since I read the first one though, so it did take a minute to remember all that had happened.  But I feel like the book kind of caught you back up in small ways, without having to go into a total info overload.  Once again, if you haven't read the first one, there will of course be some spoilers for that one, although I'll try not to give anything major away in my review for this one.

At the end of the first one, Sasha had been able to return to her world along with Grant.  However Grant's analog, Thomas, was captured and is still a prisoner.  He will be rescued though, and returned to the army, and his father, the General.  We also meet a new character in this book.  Her name is Selene, and she is another analog to Sasha and the Princess Juliana, from yet another world.  And Juliana is still being held by the Libertas as well.  Selene's world has had an eye on the other worlds, and she has finally decrypted the prophecies that will help her people save their world.  Only it will require her and her other two analogs to work together to do it. So she goes to Aurora to find them both.  Grant doesn't want to go back, which makes sense since he had been kept a prisoner only so that Thomas could go to Earth and bring Sasha back to fill in for the missing Juliana.  But Juliana loves Thomas, and wants to go back.  And so she finds someone who can help her, and she goes back.  Once she's back she is now once again in the center of all the big drama.  Selene has also arrived before her, and has refused to tell the General who she is and where she is from. And the General refuses to believe that her world, Taiga, doesn't want to come and invade Aurora.  Selene also has a connection to Sasha, and Juliana. They call it a tether.  By using this tether they are able to find out where Juliana is and try to rescue her.  When the rescue doesn't go quite as planned, and the king, who was poisoned in the last book, passes away, it is even more important for them to find Juliana, not just to save Selene's world, but also to save Aurora from the Libertas, and their ruthless leader.  We find out in this one that their leader, the Shepherd, has his own connection to the royals and has his own reasons for bringing down the King.

While some of the story may be resolved at the end, there is still more that must be done.  Some people will not make it, some will betray the trust of their friends, and more problems will arise.  New love will be found for Juliana, and Sasha and Thomas will have to fight to keep their love alive and possible.

This was a very quick read.  While I did really enjoy the character and world building of the last book I read, I also enjoy a good read like this one, that gets down to the nitty-gritty action throughout the book, and the down time is only as needed and is only as would probably be realistic.  If you enjoy a good alternate dimension story, this is definitely one to pick up.  After you get the first one that is.  And now, I must wait as patiently as possible for the 3rd book!
Posted by Lisa Mandina at 10:55 AM