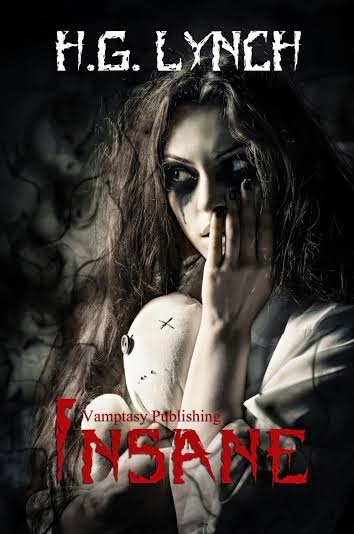 Genre: Dark Fantasy/ Horror Romance
Something evil is going on in the Montgomery Psychiatric Hospital; every time there is an unexplainable blackout, a patient dies.
Callie isn’t insane – she sees the ghost of her dead best friend only because he really is there. It’s just that nobody believes her.
Casey is scarred after a horrific attack during which he killed someone. Temporary insanity was his plea, and the asylum is his prison.
With fear and death lurking everywhere, and no way to escape, Callie is certain it’s only a matter of time before she or Casey, the odd boy she has an inexplicable link with, becomes the next victim of the creature in the shadows.
Trapped in the asylum with a killer on the loose, there’s plenty of reason to be afraid of the dark.

About the Author:
I’m H.G. Lynch, a Scottish Paranormal Romance author, avid readers, and cat-lover. I spend most of my days writing, while wrestling my cat, Sooki, off my laptop. I believe that chocolate cake can save the world, and I am highly caffeine-addicted. I can occasionally be found rolling on the floor, laughing manically, when I’ve consumed too much caffeine. I love horse-riding, Star Trek, and snow.
My books are dark fantasy romances, usually with a bad boy and a bad girl. Sometimes with zombies, sometimes vampires, sometimes other things. Enjoy!
Author Page: www.facebook.com/authorhglynch
Amazon Author Page: http://www.amazon.com/H.G.-Lynch/e/B00HZ4PIM4/ref=ntt_athr_dp_pel_1
Twitter: @HGLynch

Read below for an excerpt from the book:
Chapter One
** Callie ** “Let me go! Let go of me! I’m not crazy! I’m not fucking crazy!” I screamed, thrashing against the guards as they half-dragged and half-carried me down the pale, sterile hallway. I bit fingers and kicked shins and scratched arms, I spat and snarled and cursed, I screamed so loud I hurt my own ears and scared the hell out of half the other patients in the building. And still, the guards thrust me into a dark little room and slammed the metal door behind me, locking me in…
Again.
It wasn’t the first time I’d tried to escape, nor the first time I’d been caught. But this time was the closest I’d gotten to freedom, and to be thrown back into the tiny, dull, lifeless room I’d been inhabiting for nearly three months, to be ten feet from fresh air and grass and a world without bars on the windows and a schedule for every moment outside my room, and then be forced back into a prison – it was maddening.
But then, that was the thing about the Montgomery Psychiatric Hospital; if you weren’t already mad when you went in, you sure would be after a few months.
I slumped onto the floor and stared at the door, not sure whether to cry or try to rip the door off its hinges. I forced my mind to go blank, because at least if I didn’t think about how painfully close I’d come to finally getting out of here, I could perhaps retain what was left of my dwindling sanity. If I thought about how I’d been close enough to see the huge, wrought iron gates at the end of the gravel driveway through the glass doors, I’d probably lose it for good, and then I’d actually deserve to be here.
For now, I was sane.
It was just that nobody believed me.
They said I was crazy. That I was a danger to myself and possibly to others. That I was delusional, paranoid, disturbed. That I heard voices.
Well. That much was true. I did hear voices. Actually, only one voice.
“Failed again, sweetheart. Nice try, though,” said the voice that nobody else could hear. It was a voice I knew all too well – a voice I’d known since I was seven years old.
I tore my gaze off the door, and turned to see him. He was sitting on the bed, looking as real as he had the day he’d died. Silky brown curls, pouty lips, and hazel eyes. Silver hoop earring in one ear, ragged jeans with holes in the knees, and a sleeveless dark blue shirt that exposed the pentagram tattoo on his left bicep. Overall, gorgeous. And absolutely, unequivocally dead as a doornail.
I sighed and grimaced at the ghost of my dead best friend. “Shut up, Chester.”
He folded his hands over his heart, pretending to be injured – which would have been a lot funnier if his heart was still beating. “Aw, don’t be like that, Cal. I’m sure you’ll make it next time.”
“You said that last time.”
“Did I?” He frowned and scratched the back of his head. “Well, I guess I was wrong then.”
I snorted. “Yeah, that’s really reassuring.”
The Giveaway
$15 Amazon Giftcard
a Rafflecopter giveaway
Posted by Lisa Mandina at 8:00 AM