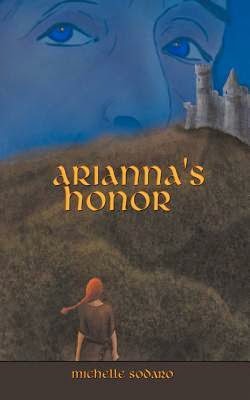 This is another book by a really good friend of mine, Michelle Sodaro, who also wrote the book Whatever You Make Of It.  You can read my review of that one HERE.  This book is a bit different than that.  It is a fantasy book.  Now, I know I keep saying over and over that fantasy isn't really my number one genre.  But, I just had to read my friend's book!  And to read all that she posts about her stories on Facebook and on her blog, Sodaro's Stories, really got me interested to see just what she'd written.  So about a year or so ago, she had a presentation and signing for this book especially, and I went and bought it, as well as getting an extra copy to giveaway here on my blog.  You can look for that giveaway in August, when I will be celebrating my 5th Blogoversary with a bunch of prizes!

The main character of Arianna's Honor is, of course, Arianna.  She takes care of her younger brothers since her parents are both dead.  Her father was killed because he supported the king.  And on the day she tried to save him, she was also attacked.  While she had grown up with lessons on fighting, the number of men that day were too many for her by herself.  Since that time she has just lived with her brothers and tried to take care of them, especially as one of them is sickly.  The book starts off when she hears someone screaming for help in the forest.  It turns out it is the Prince, Prince Nicholas.  She takes him to her home until she can get him back to the castle.  But when she goes into town to try to get her carriage back for the trip, she overhears an assassination plot.  One being lead by the very man who has been trying to court her for years.  So she decides she must protect him, because even though she blames the king for her father's death, she also knows that her father died supporting him, so she can't do something that would negate his sacrifice.  Along the way the Prince and Arianna get to know each other.  There is a bit of a romantic/friendship that grows through the stress and danger.  When she first meets him, the Prince is a bit of a blowhard, a womanizer, with no respect for what the real world and real people do every day.  Being with Arianna and her family will change him though.  For the better.  there are gypsies in the story, for the most part they are helpful to Arianna, but she must know which ones to trust.

One thing I really liked is a description for this that I read that this is the girl saving the Prince, instead of the normal fairy tale which is the other way around.  It leaves a bit of a cliffhanger, a happier ending, but still not out of the woods.  The 2nd book is out this month, so will have to get ahold of that and read on!  If you like a quick fantasy read with a bit of humor in the relationships, then you will enjoy this book.
Posted by Lisa Mandina at 2:40 PM