The Rule of Three by Eric Walters 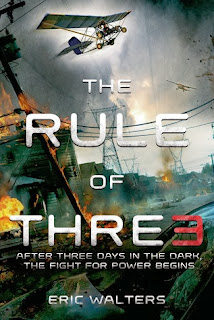 First I will thank Netgalley, FSG, and Macmillan Children's Publishing Group for allowing me to read an e-galley of this.  As anyone who follows my blog probably knows, I am a huge fan of dystopian stories.  So this sounded like one of those, although, really more of a post-apocalyptic, but similar.  And it was.  However, it was a bit slow for me.
The main character is Adam Daley, and strangely enough his elderly neighbor Herb.  Things seem to be just a normal day at school.  Adam and his best friend are sitting in computer class, when all the electricity and computers go out.  Now, it's not just those things connected to electricity, even laptops go out.  Something has happened that has caused anything that works with computers to no longer work.  Which means any car without computers in it, older cars, will still work.  And that included Adam's '79 Omega.  Up until this point, his friend Todd had made fun of it.  But now, when it is about the only car in the high school parking lot that will actually start, he's not so amused by it.  Once Adam gets home, after picking up his younger brother and sister from their school, dropping his crush Lori off at her family farm, and also dropping Todd off, he is met by their neighbor Herb.  Herb has a favor to ask.  He wants Adam to drive him to the Pool store.  The drive there is a bit scary as there are people who stare at them as they drive by, some looking as if they'd like to steal the car.  At the pool store Herb has a lot of cash that he give the guy for a ton of chlorine tablets.  It seems Herb may have an inkling about the whole situation not just being a temporary one.  As they're loading the car up with buckets full of the chlorine tablets, they even have a group of men who once again try to take the car.  But Herb moves his jacket to show a gun and the situation is defused.  They get back home and now Herb begins to talk about what may be going on.  He begins planning what they should do, how to be safe, and keep themselves safe.  Many of the plans seem to be quite pessimistic in Adam's point of view.  But as things that Herb has somewhat hinted at begin to occur, it seems maybe he knows what to do.  They must figure out how to secure their neighborhood, as well as what to do in order to keep themselves fed in case things don't get back to normal soon.  This includes talking to Lori's family about farming, and making some improvements in the walls/fences around their neighborhood, as well as planting some fields in yards and school lands.  Also, Adam has a very light plane, called an Ultralight.  And he gets it ready to be flown, and they are able to use it to do scouting to try to help their situation as well.  And while mostly it is just groups of people from neighborhoods that they see walking outside their area, there seems to be a larger group that may not be as innocent, may be out for only themselves.
This is a book that really just goes into the setting up of a community for this type of situation.  Yes there are times when we have conflicts with other people and neighborhoods. But a lot of it is about how they figure out what to do and how to help themselves to survive.  In a way, it feels like what maybe following how the Governor set up his town in The Walking Dead.  Or on the show Revolution, just the beginning of how they got to handling the disaster.  All the stuff that is usually skipped in books or movies or tv shows.  Because it is kind of boring.  Maybe it is important for us to know if such an event does occur.  But honestly, I found it a bit boring.  While it was interesting to hear Herb's strategies, and the reasoning behind what they did, the story did kind of just stall out in my opinion.  And the end was really just kind of a sudden ending, and you're left before probably any of the stuff that would normally be in this type of book starts to occur.  That's just my opinion.  I still gave it a 3, because it may be something that others want to read.  Another issue I had is that I want to know why the things with the computers went out.  And what has happened to Adam's father who is a pilot and would have been in Chicago at the time.  Is the author planning a sequel?  Can't tell.  But I don't know if I'd read on or not.  My need to know those things may not be strong enough to read through another slow story.  400 pages of slowness.  So not one of my top books.  But like I said, on Goodreads I gave it a 3, because it wasn't bad, just wasn't my cup of tea.
Posted by Lisa Mandina at 11:31 AM