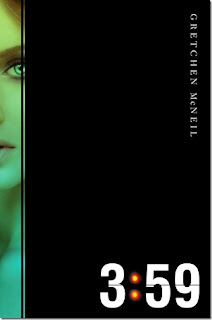 I was lucky enough to get a copy of this at the RT Convention back in May of 2013 when it was in my hometown of Kansas City.  I got to meet the author, and of course got the ARC autographed.  I've had it up by my jacuzzi tub, and have been reading it whenever I get a chance to take a nice relaxing bubble bath.  Once again I have to say that this book wasn't quite what I was expecting, but this time it kind of blew me away!  A really great story!
When it talks about being scared of the dark, it has to do with an alternate universe, one where in the dark there are creatures that kill.  Yet somehow they now seem to be in our main character, Josie's universe.  We start out and Josie's life is just going downhill.  Her dad has moved out, her mom seems to have changed a lot, almost a different person.  She's been so stressed about her parents that she'd not been spending as much time with her boyfriend.  Which leads to him breaking up with her.  And not just breaking up with her, but having been seeing her best friend all this time.  So now she's not only lost her boyfriend,  but her best friend.  And she's been made the laughingstock of the school.  She also loses her job, another reason that has kept her away from her boyfriend.  She's had trouble getting there on time, and this one day, as she gets stuck at the train track, she seems to fall asleep, and be woken up by an explosion, and all of a sudden it is much later than she remembered.  This little episode occurred at 3:59 pm.  That night she can't sleep, and notices as she looks into her mirror that she sees another room, like hers, but not exactly.  And she sees herself, kind of.  It turns out that the mirror is a link to this other world.  In this world it seems that her alternate self is still with her boyfriend, Nick.  And she still has her father living at home.  And it seems like a wealthier house, the furniture and decorations much more expensive looking.  Eventually she figures out how to communicate with her "self".  And they agree to switch places for just a day.  Only, when Josie tries to see Jo at the end of the day to switch back, after finding out things aren't quite as good as her twin, "Jo" made them out to be, the mirror is no longer facing her room.  It is facing a wall.  And Josie has no way to get home.  Now she is stuck in this alternate universe, and all she wants is to get back to her real world.  But she learns things here have affected her own universe, and she must do what she can to make things right here, in order to stop things from going wrong in her own universe.
This was a great story.  Lots of twists and turns that kept me guessing until the end.  I really enjoyed this story, and look forward to reading more of this author's books. 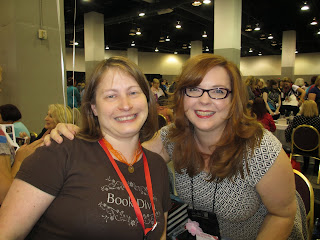 Horrible shot of me, but here I am with the author, Gretchen McNeil. 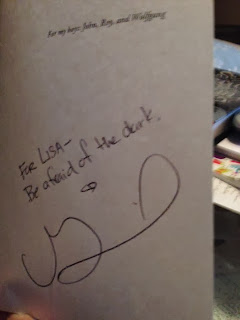 Here is the autograph in the book.
Posted by Lisa Mandina at 8:24 PM