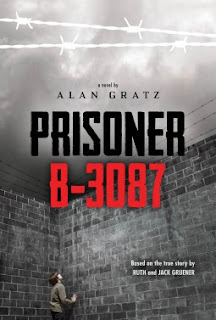 Thanks to Scholastic and Netgalley for allowing me to read an e-galley of this book in Fall of 2012.  I have always been fascinated by the Holocaust.  It just amazes me that things like this can actually take place in real life.  That people can be so horrible, and other people just look on, or look away and let it happen.  The reviews already posted on Goodreads were a bit down on this, one said that some of the stories were copies of other stories?  I don't know about that.  I mean really, the stories of the Holocaust will all have similarities, this happened to a lot of people!

In this story we follow Yanek, who begins by living with his family, in what will soon become one of the Jewish ghettos.  His family's apartment will soon become home to several families, as the Jews are forced to all move in together.  We see him get to do a little rebelling when he sneaks out with his father to a family bakery.  Then his family is able to stay together longer when he discovers a room on the top of their building that they are able to hide in whenever the sweeps are done that pull people out to go to the camps.  They make it quite awhile, until one day he comes back to see his family being taken away.  Soon he lives on his own, until he is taken away to a camp.  When he gets to the camp, he sees his uncle and cries out to him.  But his uncle motions him away and walks on.  When the guards hear this, but don't see who made the noise, they end up killing another person.  And now Yanek has learned the way of the camps.  Don't be noticed, do your work, but don't work too hard.  His uncle does what he can to help him.  By helping him get jobs in places outside, away from a sadistic soldier, it saved him.  But one day his uncle is killed, and he has no help.

Yanek gets moved from camp to camp.  We get to see his experience through the cattle cars, standing stuck next to people who had died.  Then camps that were famous.  And finally even a death march.  That he survived.  He was in camps where they made them work by digging holes, then filling them back in.  Carrying rocks to one side of the camp, only to have to carry the large heavy rocks right back.  Through it all Yanek was lucky enough to last, and barely scrape by.

This is supposed to be a true story, and it is something I will want to look into and read more about.  Once again I feel this is a good picture of the time, a snapshot of several different camps and the way people survived, or didn't.  It is one that I would add to my collection of books on this subject, and will recommend to the Social Studies teachers I work with.
Posted by Lisa Mandina at 10:48 AM