A Million Suns by Beth Revis 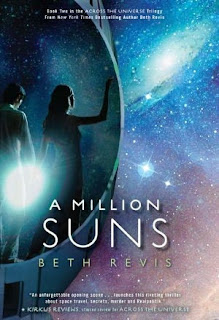 I think it was winter of 2010 when I first saw Across the Universe by Beth Revis on a display at the bookstore where I work part time.  The cover was so great, but the title made me think it had something to do with the movie by that same title from a few years ago.  A movie I wasn't a fan of.  But then, the cover kept drawing me back, and finally I picked it up and read what it was about and was hooked.  It seems there isn't much space science fiction for teens other than Ender's Game by Orson Scott Card.  And I do like that type of science fiction.  Especially the basis of the story.
You may have also noticed several posts from me lately saying that I've been disappointed, or that 2nd books in series just haven't been quite as good as the first.  In A Million Suns' case, that is sooooo not true!  This book was extremely good.  We had a mystery to solve, Orion, an Elder who went crazy and started killing the scientists and other people who were cryo-frozen, is now frozen himself, but has left a mystery for Amy.  Amy has to hide.  Now that Elder, who is now Eldest whether he likes it or not, took all the people on the ship off of the Phydus drug that kept them all calm and peaceful, they distrust Amy and think of her as a cause for all their current problems, lack of food, finding out that they haven't reached, and may not reach Centauri-Earth in their lifetime because of engine problems.
Elder has a rebellion on his hand, in part led by one of his once best friends, Barti.  In the midst of trying to solve all the problems with this, along with trying to help Amy solve Orion's puzzle, Elder goes outside the spaceship based on one of Orion's clues, and WOW!!!!  What he finds is amazing!  I literally gasped at what he found outside the ship.  I won't spoil it for you, you need to read and be surprised just like I was.  But once again, I say this is a great sequel, doesn't disappoint at all, such a great 2nd installment to a series.  I am so ready to read the 3rd one now!  If only I could some way get the ARC of the 3rd book, that would probably make my year!  I've not read either of the two so far that way, but would love this time.
Great, great, GREAT! book.  Go out and read A Million Suns as soon as you can!  And if you haven't read the first one, Across the Universe, yet, do that quickly.
Posted by Lisa Mandina at 6:54 PM